Moving to Texas? 8 Fun Facts About Your New Home 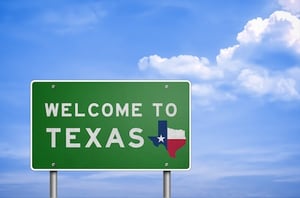 Texas is big and growing bigger. According to the U.S. Census Bureau, more people moved to Texas than any other state between 2015 and 2016.

If you're one of those headed to the Lone Star State and our Springs San Antonio luxury apartment communities, here are some helpful and entertaining facts about your new home.

Texans are a warm and welcoming bunch. In fact, the state name comes from the Native American word "tejas," which translates to "friends" or "allies."

2. Living Is Easy ... and Inexpensive

Most things are bigger in Texas but that doesn't apply to the cost of living, which is 11 percent lower than the national average. San Antonio itself is nine percent below the average, scoring particularly well in transportation, childcare and healthcare costs.

3. One Extreme to the Other

Thanks to its geography, Texas weather varies from subtropical humidity in the east to desert dryness in the west. San Antonio rates a score of 70 out of 100 on Sperling's comfort index, placing it well above the national average of 54.

Texas is one of the most well-protected states in the country. It is second only to California in the number of active-duty military personnel, with a total of more than 170,000.

5. A Bigger Slice of the Pie

Tired of looking at all those deductions from your paycheck? Texas has no state income tax and the state sales tax is a relatively modest 6.25 percent. In addition, while San Antonio is the 7th largest city in the U.S. by population, they are a much lower #17 on the list of city sales tax rankings.

Yes, Texans are justifiably proud of their legendary Mexican cuisine, but the dining landscape also includes world-class steakhouses and some of the best BBQ in the country. If red meat isn’t your thing, there is an abundance of regional produce and fresh-caught seafood.

With one foot in American history and the other in Mexican history, Texas has a rich heritage unlike any other state. Each year millions of people, both residents and tourists, flock to sites like the Alamo, the Stockyards and Dealey Plaza.

Fun fact: Texas-based theme park company Six Flags took its name from the six different flags that have flown over the state throughout its history.

Appropriately enough, the State Fair of Texas is the largest in the country. Held in early fall at Fair Park in Dallas, the event runs nearly a month long and draws 3.5 million guests, which is double the amount of #2 on the list, the Minnesota State Fair.

What do you enjoy most about living in Texas? Tell us in the comments!

Love Me, Love My Dog: 6 Tips for Using Fido to Make Friends

Time is on Your Side: 5 "Timely" Tips for Planning an Apartment Search