5 Interesting Facts About Tulsa and Oklahoma 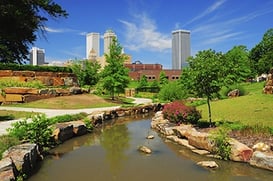 Even if you’re a long-time resident of Tulsa there may be things about the city and its history that you may not know about. Likewise for new occupants, you're probably still getting used to your new surroundings and settling in. Here are 5 fun, interesting facts about Tulsa to introduce you to your hometown.

1. From Tallahassee to Tulsa

Native Americans first arrived at this spot in 1836 and called their settlement Tallahassee. After the Civil War, the reconstruction period helped the area grow and it became known as Tulsey Town. In 1879 the first Post Office opened and the name of the town was officially changed to Tulsa.

2. Tulsa Is Home To The Largest Bull Sharks In Captivity

You can see for yourself if you take a trip to the Oklahoma Aquarium. Feeding time at the aquarium runs from 11 a.m. to 3:30 p.m. You can also see the turtles, eels, beavers, sharks and piranha among the 200 marine and animal attractions on site.

In 1907, businessman Cyrus Avery moved to Tulsa to farm and raise a family. He joined the Oklahoma Good Roads Association and began pushing for improvements of roads statewide. He also realized that an interstate system of highways would help Tulsa and Oklahoma prosper. He petitioned to create a roadway linking Chicago and California, and U.S. Highway 66 or Route 66 as it was later called, was born.

Oklahoma has been the setting for at least two popular box office movies. "The Outsiders" a film by Francis Ford Coppola, was filmed and set in 1955 Tulsa, Oklahoma.

Another popular movie filmed in Oklahoma was "Twister". The movie was partially filmed on location in Wakita (Aunt Meg's House), Guthrie, Norman and Ponca City, Oklahoma. Wakita is also home to the only "Twister" museum and has signed memorabilia from actor Bill Paxton and one of the movie props of "Dorothy."

Did you know that Oklahoma was the last state in the U.S. to legalize tattooing? Oklahoma has a long history of tattooing, starting with the Native Americans of the Five Civilized Tribes that were moved to Oklahoma between 1825 and 1842. But in 1963 tattooing was banned because it was considered an unsafe practice. It wasn’t until recently, May 3, 2006, that tattooing was finally legalized in Oklahoma.

Know of any other interesting facts about our great city? Let us know in the comments below.