Raise a Glass at These 4 Tulsa Microbreweries 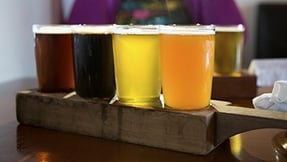 Beer-drinking has been elevated to new heights with the trend in microbreweries. In the past, beer lovers were limited to only three to four popular brands. But with microbrews gaining popularity in recent years, the choices are vast. Revival Red Ale, Dead Armadillo Amber, Red OPA and F5 IPA are just a few popular microbrews in Oklahoma. In Tulsa, here are a handful of places where you can sample some of the best microbrews in the area.

Marshall Brewing Company began as the idea of Eric Marshall, a brewmaster trained in Munich, Germany. His business model focuses on creating the best quality product with old world knowledge and expertise. Some popular brews at Marshall's include Revival Red Ale, Arrowhead Pale Ale and Big Jamoke Porter, a rich dark full-bodied brew. Tours and 3 oz. samples are available at no cost.

Looking for a good summer ale to try? Funky Gold Mosaic, a dry sour brew, has a tropical profile. Prairie Hop, another summer favorite is making it's return. This microbrew infuses the flavors of mango, peach and tangerine, making it the perfect summer beer. If you love a good Belgian, Prairie Ale may suite your tastes. This company was founded by two brothers who wanted to make awesome beer – a very noble goal, indeed. The taproom is open to the public Wednesday 5 p.m. – 8 p.m., Friday 4 p.m. – 8 p.m., and Saturday 1 p.m. - 5 p.m.

McNellie's is not a brewery but showcases many of the local favorites.  McNellie's beer menu includes craft beers from Oklahoma such as Dead Armadillo Amber, Marshall's Arrowhead Pale Ale, Roughtown IPA as well as an extensive collection of hard-to-find draught beers from all over the world. House favorites include Coop 5 IPA, Prairie Standard, Choc Oklahoma Pale Ale and Marshall McNellie's Pub Ale. Enjoy a cold one with a juicy burger, sweet potato fries and house favorite fried pickle chips w/ranch dressing.

If all this talk about beer has your mouth watering for an icy cold one, grab a friend and head for the closest brewery for a sampling of some of the best craft beers in Oklahoma.

What's your favorite brew and why? Share it in the comments section.

Previous Story
← Having Guests? Check Out These Boutique Hotels in Tulsa
Next Story
Where’s the Best Brunch in Tulsa? →