Warm Your Body and Soul with 5 Fast Fall Recipes 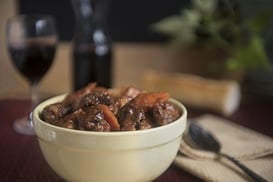 This article originally appeared on the Springs "You're Home Blog."

Shorter days and cooler temperatures of fall mean a shift from light summer salads and grilled veggies to warmer, soul-satisfying foods. Here are some tasty recipes to try that you can fix in a jiffy in your apartment home, even after a long day at work.

Heart-healthy salmon pairs with hearty potatoes in this one-skillet dish.

Add a fall twist to this south-of-the-border favorite.

Save time by using a 1-pound packaged pre-cooked pot roast.

Who needs carry-out? This dish will satisfy your craving for Asian food.

You can never go wrong with sandwiches. Start the chicken in the slow cooker in the morning for quick prep at dinner time.

Previous Story
← 7 Ways a Luxury Apartment Makes Your Life Easier
Next Story
Dotting the I's and Crossing the T's: How to Decipher Your Lease →

7 Surprising Essentials That Should Be in Every Apartment Home

Is Your Pet a Good Neighbor? A Guide to Dog Etiquette for Apartment Residents

7 More Places You Forget To Clean