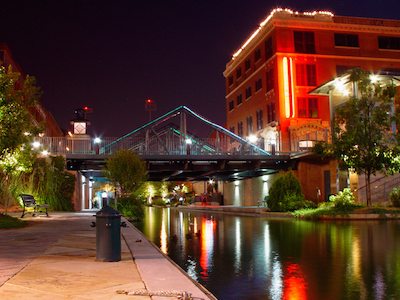 The Highest-Rated Attractions in Oklahoma City 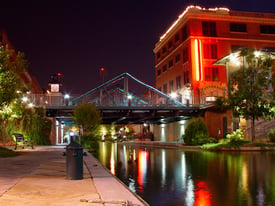 How well do you know Oklahoma City? You may not realize that it's home to a number of unique attractions and entertainment options. Enjoy a change of pace from your usual leisure-time activities and explore these lively places to visit right in your own backyard.

Oklahoma City is justifiably proud of this neighborhood that has become the area's top tourist attraction, according to AboutTravel.com. Once the heart of the downtown warehouse district, Bricktown is the result of a major renovation initiative by Metropolitan Area Projects (MAPS). With dozens of restaurants and nightclubs, specialty shops and attractions, each visit to Bricktown is like a new experience.

Developed in 1929 as the first shopping district north of downtown, the Paseo began its transformation into an arts district in the 1970s. Today, this curved, two-block street is home to 20 galleries, more than 70 artists, restaurants, art schools and boutiques. The district’s annual Paseo Arts Festival is Memorial Day weekend and will feature more than 80 visual artists, dozens of musicians and other live performances.

The Old West and its rugged cowboys are essential elements of the American mystique, and Oklahoma played a prominent role. This museum was founded in 1955 as a way to preserve valuable Western art and artifacts as well as educate visitors about the history and culture of the American West. View the comprehensive permanent collections as well as the themed exhibits scheduled throughout the year.

The OKC Zoo is rated one of the top 10 zoos in the country as well as one of the top three family-friendly zoos. Get an up-close look at more than 500 species of animals including gorillas, orangutans and chimpanzees that make up the popular Great EscApe exhibit. The zoo features stunning examples of other forms of life as a fully accredited botanical garden.

On April 19, 1995, the Alfred P. Murrah Building was the site of a bombing that remains one of the country's most tragic events. The museum serves as a memorial to the victims as well as a testament to the resiliency and strength of the community. Take a self-guided tour through the "chapters" that use video and audio resources to recount the story from the hours before the blast through the aftermath to the healing and legacy of hope.

Double your fun with this exciting amusement park and water park duo. Frontier City is a Western-themed park with more than 50 rides and attractions including thrilling roller coasters, saloon shows and concerts featuring nationally-known acts. White Water Bay has refreshing water rides from leisurely river floats to the 277-foot-long speed slide of "Mega-Wedgie." Double-park passes allow unlimited visits to both locations as well as a number of special perks.

Do you have a favorite Oklahoma City attraction to add to the list? Share it with us in the comments!

Next Story
Our Favorite Shopping Areas in Oklahoma City →