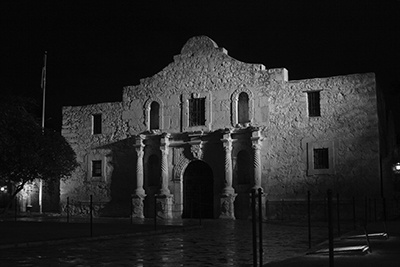 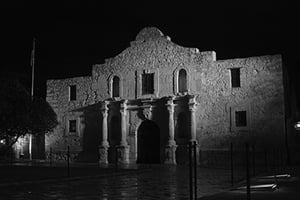 Do you believe in things that go bump in the night? San Antonio is home to a number of reputed haunted sites. We've put together a list of some of the top spots for you to visit, if you dare. Don't say we didn't warn you!

It's not surprising that ghosts are believed to haunt San Antonio's most famous landmark, site of an extended battle during the Texas Revolution that claimed more than 2,000 lives. Visitors have reported moans and sightings of spirits belonging to the defenders of the Alamo. The story is that they may have continued to serve after death, turning away the Mexican forces sent to destroy the fort after Gen. Sam Houston's victory in the Battle of San Jacinto.

This historic building adjacent to the Alamo, where Teddy Roosevelt recruited his team of Rough Riders, is said to have ghosts of its own. Cattle baron Richard King was a part-time resident of the Menger who passed away in the hotel, where his funeral services were also held. Several guests have reported seeing a ghost dressed in a bolo tie and black hat wandering the halls. The elevator supposedly stops each time on the third floor, home of the King Suite.

The inn's own website refers to Victoria's as "the most hauntingly romantic location" and it's a popular stop for ghost hunters from all over the state. The property on which the inn sits has a colorful history as a battle site and Indian encampment. Victoria's embraces its haunted-house reputation, hosting ghost tours and "Slumber Not" parties where "survivors" are awarded with a certificate.

The park grounds once served as an 18th-century Catholic cemetery holding the remains of Indians and Spanish settlers who waged battle to claim the land. According to legend, visitors who walk through the park holding thoughts of anger and hatred will awake the sleeping spirits.

Not far from the San Juan Mission is a railroad crossing that appears unremarkable, but in the 1940s it was the site of a tragic accident when a train struck a bus full of schoolchildren. It's said that if you stop on the tracks with your car in neutral, the spirits of the deceased children will push it to safety. In addition, if you dust your bumper with baby powder it will capture the tiny handprints of the ghostly "helpers." Cars are frequently lined up at the intersection with drivers hoping to test the phenomenon for themselves.

Do you believe in ghosts? Give us your opinions in the comments!