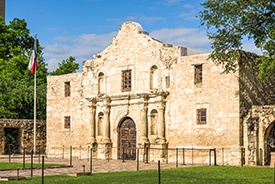 San Antonio is steeped in a unique mix of history and culture that makes it one of the most-visited cities in the United States. Whether you're entertaining out-of-town guests or exploring on your own, don't miss these top historic sites near our Springs Apartments communities in San Antonio.

San Antonio is synonymous with the name of this centuries-old mission, site of a famed battle during the Texas Revolution featuring legendary figures such as Davy Crockett and Jim Bowie. Tours, interpretive talks and featured exhibits provide insights into the Alamo and its place in Texas history. Plans are underway for a museum housing the extensive collection of rock star Phil Collins, who has had a lifelong fascination with the story of the Alamo. Hours are 9 a.m. until 5:30 p.m. daily (7 p.m. during the summer) and admission is free.

Enjoy a piece of contemporary San Antonio history at HemisFair Park. The nearly 100-acre site in the heart of the city center was home to the 1968 World's Fair. Tower of the Americas, a 750-foot-tall structure, is one of 24 original buildings that remain today. Hours are 7 a.m. until midnight seven days a week and admission is free.

La Villita or "Little Town," is the best spot to be immersed in the Hispanic culture that has been such a significant part of San Antonio's history. The area was one of the city's original neighborhoods back in the 18th century, and the Works Progress Administration (WPA) participated in its restoration during the 1930s. In addition to art galleries, shops and restaurants, La Villita has a year-round schedule of festivals, concerts and other events. Hours are 10 a.m. until 6 p.m. Monday through Saturday and 11 a.m. until 5 p.m. Sunday. Admission is free.

National Geographic Society dubbed the Spanish Governor's Palace "the most beautiful building in San Antonio." The home, furnished with Spanish Colonial pieces, served as a residence and office for military leaders during the state's time under Spanish rule. Hours are 9 a.m. until 5 p.m. Tuesday through Saturday and 10 a.m. until 5 p.m. Sunday. Admission is $4 for adults and $2 for kids between the ages of 7 and 13.

When the Aztec opened in 1926, it was one of the premier movie houses in the country. With a total cost of just under $2 million, the theater is a stunning example of Meso-American architecture. In 1992 the Aztec was added to the National Register of Historic Places, and today it's a multi-purpose entertainment facility hosting live music that is also available for private functions.

Did we miss your favorite spot? Tell us about it in the comments!

Previous Story
← Leasing an Apartment vs. Leasing a House: A Side-By-Side Comparison
Next Story
Top 6 Reasons Why You Should Be in a Luxury Apartment Home →