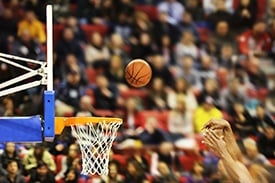 There's nothing like the excitement of watching a live sporting event. Check out these great teams that play within close proximity of our Springs San Antonio luxury apartment communities.


San Antonio residents are passionate about the Spurs, the city's NBA representative. The Spurs are one of the younger members of the league, having joined in 1976 as part of the ABA merger, but they have the highest winning percentage among active NBA teams. San Antonio's illustrious history includes 21 division titles, six conference titles and five NBA titles, the most recent occurring in 2014. The current roster features stars Tony Parker, Manu Ginobili, Pau Gasol, Kawhi Leonard and LaMarcus Aldridge.


As a member of the WNBA, the Stars are the "sister" team to the Spurs. In their 14-year history in San Antonio the Stars have also enjoyed a high level of success, reaching the playoffs seven times and winning the 2008 league championship. In 2014 Becky Hammond, the first Star to have her number retired, blazed another trail by becoming a full-time assistant coach for the Spurs, the first female to do so in any of the four major pro sports leagues.


Hockey in San Antonio? Yes, it's true! The Rampage are a member of the AHL and the #1 affiliate of the NHL's Colorado Avalanche. Represented by their bovine mascot "T-Bone," the Rampage won their division championship in 2015. The team's current staff includes assistant coach Randy Ladouceur, who has nearly 25 years of experience as an NHL player and coach for top teams such as the Detroit Red Wings and the Montreal Canadiens.


College basketball has a devoted fan base, and the delightfully-named Roadrunners have been one of the more prominent teams in Conference USA of the Division I level. The Roadrunners have won three conference championships and have reached the NCAA Tournament four times as the victors of the C-USA Tournament. This marks the debut season for Steve Henson as head coach after five years as an assistant under Lon Kruger at the University of Oklahoma.


What's summer without baseball? The San Antonio Missions are the Double-A affiliate of the National League's San Diego Padres. Thanks to their popularity, the Missions were named the Texas League's 2016 Organization of the Year after setting an annual attendance record. Minor league baseball is known for having an intimate local atmosphere, and the Missions hold regular promotions like Family Night, post-game fireworks and a Kids' Clinic.


If you enjoy American football, why not check out the international version? The San Antonio FC is a member of the USL, the North American professional soccer league. In just the last two years the USL has more than doubled in size as soccer continues to attract more national viewers. San Antonio FC offers a number of special opportunities for kids' groups and youth soccer teams.

Did we miss your favorite team? Let us know in the comments!

Previous Story
← 5 Ways to Hold a Yard Sale Without a Yard
Next Story
Professional Management Company or Independent Landlord? A Side-By-Side Evaluation →