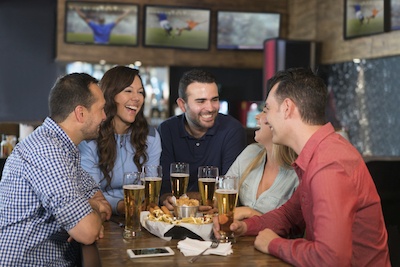 4 Places to Watch March Madness in North Aurora and Romeoville 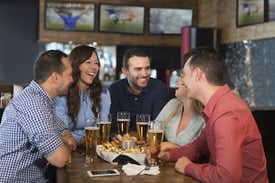 It's called March Madness for a reason — because it historically creates a sense of madness among fans (in a good way) for its jaw-dropping unpredictability.

The NCAA men's basketball championship opens with first-round games on Tuesday, March 15 and concludes with the national championship on April 4. It’s one of the most eagerly anticipated sporting events of the year, and you can make the most of it by claiming a seat at one of these classic North Aurora and Romeoville venues:

The late family patriarch of the Siddon family often called his son and daughter-in-law's restaurant “Aurora's best-kept secret” for its high quality, homemade food and lively yet comfortable atmosphere. However, Mike and Denise's Pizzeria and Pub is hardly a secret anymore. The word is out that the pizzeria and pub embodies the best qualities of the “family restaurant” — and encourages newcomers to pull up a chair as eagerly as regulars. After the thrill of March Madness, Mike and Denise's just might become your home away from home.

If you'd like to expand the turf you enjoy as a resident of a luxury apartment home, you'll want to cheer on your favorite NCAA team at The Turf Room. The main lounge features three different types of seating: a casual dining area, a sunken lounge with a four-sided fireplace, and cocktail tables that offer a great view of an open-brick oven. The Track Room might also be up your alley — private and soundproof so you can root for your team to your heart's delight. The warm, simple elegance of The Turf Room coupled with its eclectic American food menu will allow you to enjoy March Madness in style.

3. On the Rocks Spirits and Gaming
352 Budler Rd, Romeoville

Its name doesn't breed false expectations: On the Rocks lures basketball fans with festive drinks such as the blueberry bourbon, redneck Sangria, birthday cake martini and, fittingly, On the Rocks punch. If it's food you crave, On the Rocks can do a full-court press with its pizzas, breaded mushrooms, onion rings, sausage bites and homemade salsa. This great hangout offers a lively yet comfortable atmosphere with plenty of flat-screen TVs in virtually every corner.

Die-hard Chicago Bears fans have been flocking to Mongo Michael's since the beloved defensive tackle opened his namesake restaurant in 1991. The eatery is a virtual shrine to the “Da Bears” and the 1985 Super Bowl team in particular. But Steve "Mongo" McMichael is the quintessential sports enthusiast, and visitors get the idea the moment they step through the door and see that every sport is duly represented with eye-catching memorabilia.

Everyone who pulls up a chair instantly becomes a member of the team while savoring "Mongo's nachos," “southside sliders,” “dill-icious” dill pickles and loaded potato skins — and maybe even an autograph from McMichael himself.

Where will you be watching March Madness in North Aurora and Romeoville this year? Let us know in the comments below!

Previous Story
← 4 Venues Every North Aurora and Romeoville Resident Should Check Out
Next Story
Celebrate St. Patrick's Day at These 4 Chicagoland Events →