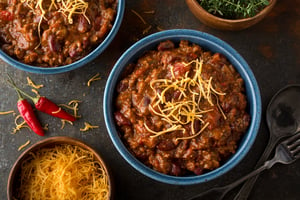 When wicked wind chill intensifies winter cold in Chicago, spicy chili recipes can warm up dinnertime. Some purists say that truly authentic chili shouldn’t contain beans, because historically, it was a merger of New World chiles and beef from cattle brought here by the Spanish.

However, a history of chili in a 2014 issue of The New York Times notes that the dish “has evolved with the contributions of several cultures.”

Also, the Times reports that chiles were important food among the Aztecs before Columbus arrived. Aztec cooking also emphasized beans, so put two and two together!

Here are some local recipes we discovered.

Look around online and you’ll find many varieties of this recipe combining pasta and chili. Lots of cooks say chili mac isn’t authentic if it doesn’t contain elbow macaroni. But we’ll side with jazz trumpeter Miles Davis who loved to cook and used spaghetti in his early 1960s recipe. Forget about cheddar cheese; Davis used Parmesan.

Unlike Davis’s brew, this restaurant recipe from Jake Melnick’s Corner Tap uses butter instead of suet, cheddar cheese and elbow macaroni. It’s a creamy, dairy lover’s dream topped that mixes in a mild ground beef and bean chili including tomatillos and barbecue sauce.

For those living in the city’s western suburbs, including residents of our Spring Apartment communities in Romeoville, North Aurora and South Elgin, one of the most historical Chicago chili experiences is available in nearby Westmont. That’s the only remaining site of Bishop’s Famous Chili, a restaurant that began at in west Chicago. Mary Bishop opened her first restaurant in 1925 after losing her job at Ole’s Chili. Her great granddaughter Mary Ellen Hope contributed this recipe to a book called Killer Chili. It doesn’t reveal all of Bishop’s secret ingredients.

Van Camp is connected to a number of Chicago restaurants including Old Town Social. You won’t find beans in this Texas-style recipe rich in ancho and chipotle chile powders, beef ribs, bacon and a broad range of savory and sweet seasonings including cumin, coriander, fresh garlic, paprika, oregano, tabasco and yellow mustard.

Restaurants that serve chili are plentiful in Chicagoland, but sometimes it just feels more cozy enjoying hot chili and cornbread at home. It’s a daily staple as well as one of America’s favorite party foods. Once a year, this culinary favorite is celebrated on National Chili Day. The date this year is February 22.

The clubhouses at Springs Apartments are comfortable settings for chili parties. Visit us online today to view the many amenities at our pet-friendly, Chicagoland communities:

Where to Celebrate the Big Game in Chicagoland