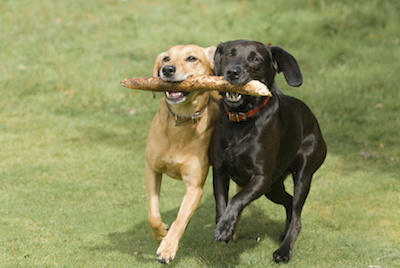 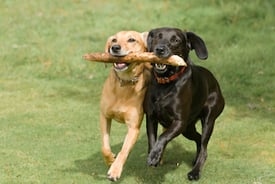 If your dog could talk, he would tell you that he gets cabin fever just like you do. Our fenced-in play areas at Springs give your pet a convenient place to burn off some energy. But what do you do when you pup gets a bit of wanderlust and wants to see more of the world? Grab some toys and drinking water and head out to one of these off-leash dog parks in Des Moines.

This landscaped park alongside a half-acre pond has separate areas for large and small dogs with a secure five-foot fence around the entire area. The grounds include a shelter and walking paths that connect to nearby Somersby Park. An annual $35 pass can be purchased at Ankeny City Hall or Parks and Recreation offices. Hours are sunrise to sunset.

Raccoon River Park, considered the "crown jewel" of the West Des Moines Parks system, is the site of this 10-acre fenced off-leash area. Blue Heron Lake is the backdrop for the park with its large and small dog areas. The former features a mowed path as well as a tall grass prairie. A paved area at the entrance holds a water fountain and waste bags. Annual permits are $20 for residents and $40 for non-residents and may be obtained at the Parks and Recreation offices or the park's Nature Lodge. Hours are 6:30a.m. to sunset.

Unlike most dog parks, this doggie "country club" is privately owned and operated. It's located on five acres in a peaceful country setting with a coded gate entry for secure access. Small dogs, large dogs and puppies all have their own areas and the grounds feature benches and walking paths. Generous amenities include an agility practice area, drinking water, pools and sprinklers, dog toys and an indoor play area. First visit is by appointment only and memberships are $65 for three months, $100 for six months and $160 for one year.

Your loyal, adoring dog loves nothing more than spending time with you. You will both have fun enjoying fresh air and sunshine at any of these parks!