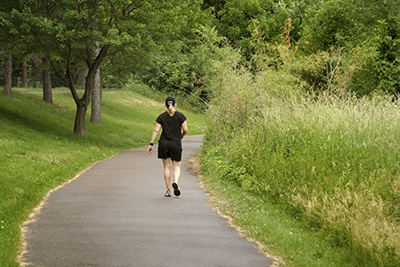 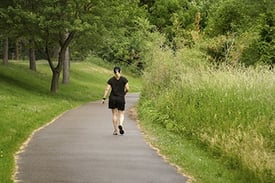 Have you gotten into a rut following the same walking or running route? Des Moines has more than 600 miles of trails to keep you motivated by exploring the sites of the city. We've found some of the top locations in the area to share with you.

Enjoy the urban sights and sounds of this conveniently located trail that passes many of the most popular landmarks and attractions in Des Moines. The trail starts at 1st and Court and loops through Principal Park at the junction of the Raccoon and Des Moines Rivers. From there it crosses the Jackson Ave. Pedestrian Bridge to loop around Gray's Lake and recross the Raccoon River at the George Washington Carver Bridge before returning to the start via Martin Luther King Jr. Parkway.

Gray's Lake Park is a beautiful oasis on the edge of downtown Des Moines. A 1.9-mile trail follows the perimeter of the park's namesake lake. The trail is well-lit and features emergency phones for greater safety. Cool off afterward with a dip at the designated beach area.

Iowa's largest urban forest preserve earns high marks from hikers for its more than two miles of trails. The lushly wooded area includes gently rolling hills and peaceful streams that enhance your hiking experience. Leashed dogs are allowed on the trail which is closed to horses, bikes and motor vehicles, so there's no congestion.

This popular 8.5-mile section of the Central Iowa Trails network follows alongside Walnut Creek. Trail markers identify the various trees, wildflowers and shrubs along the way. The trail links up with a number of parks including Campbell Recreation Area, and an extension links it to the 57-mile Raccoon River Valley Trail.

This trail gets its name from the Chicago Great Western Company that originally ran trains along the same route. Today it's a 16.5-mile paved trail that originates near Des Moines' Water Works Park.

Where is your favorite place for an outdoor workout? Share it with us in the comments!