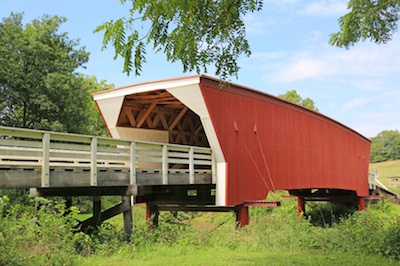 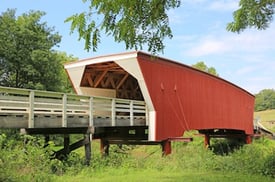 Looking forward to some time off this summer? Or maybe you just want some creative ways to spend the weekend. You don't have to plan elaborate vacations to get away when there are fascinating attractions only a couple of hours away from Des Moines. Here are a few suggestions for some entertaining trips you can make in a day.

Movie fans will get a special thrill out of visiting Madison County, but everyone can appreciate its rural American charm. You'll feel like you stepped right onto a movie screen when you explore the sites featured in the popular Clint Eastwood-Meryl Streep film, The Bridges of Madison County. You can also tour John Wayne's birthplace, which has been restored to its 1907 appearance and houses memorabilia like the eye patch worn for his Oscar-winning performance in True Grit.

The largest city in Nebraska offers a nice blend of historic, outdoor and cultural attractions, many of which are within easy distance of the downtown area. The Old Market District retains the look and feel of the 19th century down to the cobblestone streets. From there you can walk the Bob Kerrey Pedestrian Bridge that links Nebraska and Iowa. Learn about the city's history at the Durham Museum, a stunning Art Deco building that was originally one of the busiest train stations in the country.

Waterparks are great places to be active while staying cool. Lost Island features nine waterslides along with the Tsunami Bay wave pool and the Kalahi River float. Dry land activities include a zip line, go-kart track and miniature golf course. If you want to spend a couple of days, there is an adjacent KOA Kampground that also has cabin rentals.

Are you feeling the need for speed? Hit the road and head over to the "Fastest Short Track on the Planet," designed by NASCAR Hall of Famer Rusty Wallace. Iowa Speedway hosts four exciting weekends of racing featuring NASCAR XFINITY and Truck series events as well as ARCA and Indycar.

This group of seven villages settled by German immigrants in 1855 had an almost completely self-sustaining economy and lifestyle for 80 years. Today it still serves as an oasis away from the faster pace of the larger cities. The streets are lined with craft shops, art galleries and even an authentic general store. Enjoy tastings at the local wineries and brewery and dine on traditional German food at one of the charming restaurants.

What's your favorite way to spend a day off? Share your ideas with us in the comments!