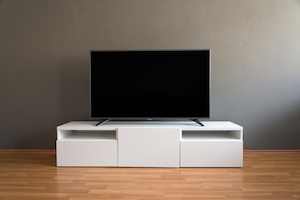 To TV or Not TV? The State of TV Watching Today

Once upon a time, TVs were big, bulky pieces of furniture that picked up three channels if you were lucky. Today they're sleek enough to mount on the wall of your Springs luxury apartment home and they can get hundreds of channels devoted to everything from sports to shopping.

As if that's not enough, you don't even need a television to watch TV. Laptops, tablets and smartphones can all stream content on demand. Here's a look at where TV fits into our lives today (and maybe where it doesn't).

TVs by the Numbers

Gone are the days of planning your schedule to catch the big game or your favorite show. DVRs, subscription services and other options let you watch content at your leisure.

Nielsen, the data measurement company that has been providing its iconic TV ratings system since 1950, created a new category to reflect this trend. "Time-shifted viewing" refers to any content watched up to seven days after its original airing.

Does TV Watching Belong in the Bedroom?

The bedroom has long been a popular place for TV watching. It's less likely to disturb others, and you can relax more easily. In a National Sleep Foundation poll, they discovered that 89% of adults and 75% of kids have at least one electronic device in their bedrooms, with a TV being the most common.

But it's best to proceed with caution. Experts say that regular TV watching usually isn't a problem, but binge-watching can cause poor sleep quality. Limit your viewing time and use a timer when possible for automatic shut-off.

You probably don't actually need anyone to tell you that too much TV watching isn't good for you. Make it a point to include other activities in your leisure time. Read a book, play with the kids or practice yoga poses in our 24/7 fitness centers.

What's your favorite non-TV-watching way to unwind? Let us know in the comments!

Previous Story
← The (Not So) Secret Garden: A Guide to Growing Fruits, Vegetables and Herbs on Your Balcony or Patio
Next Story
Give Me a "Break!" 5 Tips for Packing Fragile Items →